Move Your DNA does for physical activity what paleo diet advice does for food.

The book is full of suggested movements to practice, making it look somewhat like a yoga book.

Bowman criticizes the common notion of exercise, because it leads to people repeating a tiny set of motions.

Most of us wouldn’t imagine that we had a healthy diet if we ate nothing but carrots, or nothing but liver, even though eating more of those is usually a good idea. Yet plenty of people seem to imagine that they can offset the risks of spending 60 hours per week in chairs by running for a few hours on a carefully maintained surface, repeating a single type of motion with no variation.

A healthier lifestyle would include a wide variety of motion, ideally motivated by the need to accomplish a wide variety of tasks such as carrying wood, digging, pounding nuts, and walking on terrain with lots of little irregularities (she calls this cross-terraining).

How much does it matter? Bowman provides surprising hints, and good theoretical reasons for concern, but leaves me with a good deal of uncertainty about the magnitude of the harm.

Bowman’s most conspicuous example of harm due to unnatural movement comes from Orcas. There’s something about the way that captive whales swim which tends to result in their dorsal fins flopping off to ones side: 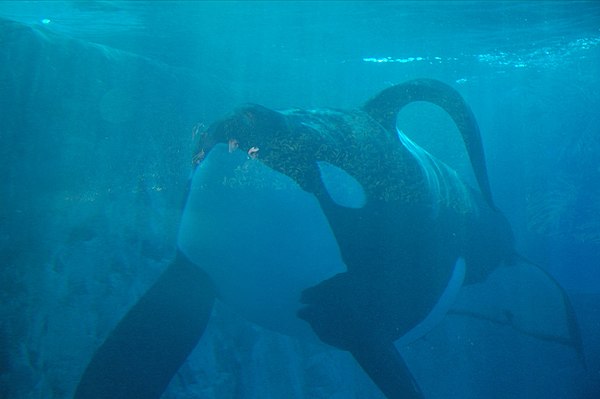 Humans in modern cultures have subtle versions of that kind of problem.

Bowman mentions a surprising hypothesis about atherosclerosis. There’s a pattern to where plaque accumulates, which may provide clues about what causes excess plaque. Unnatural motions and positions (e.g. sitting in chairs) create unusual stresses on our blood vessels, sometimes altering their shape in ways that create nonlaminar blood flow. That enables plaque to accumulate in pockets where blood flow is weak. I’m unclear how significant that is, but it seems likely that some such effect exists.

People often imagine that sucking in one’s gut leads to good posture. Bowman says that doing so pushes our intestines in unnatural ways, contributing to hernias. I’ve needed surgery for hernias, and I’m worried that they’ll recur. Yet my research into how to prevent them failed to suggest this cause. Bowman’s suggestion has deterred me from going back to using a fanny pack while hiking, since the strap for that has roughly the same effect as sucking in my gut.

The book almost lulled me into imagining the state of nature as a utopia, but then it got me curious enough to do some further reading on ancestral sleeping postures. That broke the spell with a casual mention of the need to sleep with one’s penis not touching the ground, so that insects don’t have easy access. Maybe it’s nicer to have insects testing some of my skin than it is to have the back and joint pain that seems to result from modern sleeping postures, but I’m going to pick and choose from both lifestyles, not return to a pure paleo lifestyle.

The reason I was curious was that I had discovered that I was getting trigger points in my calf muscles, probably due to contracting those muscles while sleeping on my chest (Bowman does not seem to cover this). That led me to conclude my sleep posture was unnatural, but left me unclear what position is good. I’ve now decided that I ought to sleep on my side. But so far, I’ve found it hard to fall asleep in that position.

I haven’t quite followed Bowman’s advice to “say no to pillow”, but I do use a fairly slim pillow that only lifts my head a little.

However, I can confirm that sleeping without a mattress is somewhat straightforward. I occasionally camp outdoors with nothing more than a sleeping bag between myself and the ground (i.e. almost no padding), and it generally feels ok if my body hasn’t atrophied by sleeping solely on mattresses for a year. I occasionally even sleep a bit better like that outdoors than if I’m indoors.

I hike over a wide variety of surfaces, sometimes including sand, fallen trees, and mud, and I hop on rocks to cross streams. I keep being surprised at how hard it is to predict how other hikers will react to off-trail terrains. Some experienced hikers can barely handle what I think of as typical off-trail hikes, even though they can outdo me on trails. Others handle off-trail terrain as naturally as I do.

I’ve started to do a few of the exercises in the book, and I’m trying to add a bit more variety of movement to my hikes: I aim, at least once a month, to climb a tree or play in a playground.

2 comments on “Move Your DNA”